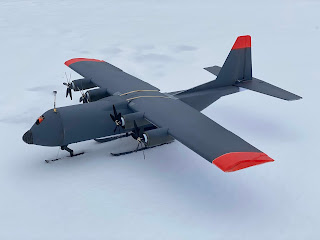 Ever since I saw a C-130 fly over my head last summer while outside on my lunch break, I was determined to one day build my own version of it.  With a mix of Flitetest and Experimental Airlines building techniques, I pecked away at it for months in between other projects to make it with a 50" wingspan and keeping it as semi-scale as possible.  The forecast of a winter day looking like decent flying weather gave me the final push I needed to get her ready.  So on a warm(?) day just below freezing, with ~6mph winds and bright yet lightly-snowing skies, I gave it a go.  I was nervous, as at 1500g it's the heaviest plane I've built so far; I wasn't sure it would even take off.

Taking off - not a problem!  Within about 10ft, it picked up enough speed sliding on its skies to jump into the air.  Too much, in fact, that I had to hold a serious elevator down to maintain level flight.  After a stressful couple of circles, I managed to gently land it in one piece.  Then I moved the battery forward a couple inches and gave some serious down trim. The next flight was very short - it went down right into the snow immediately after takeoff when I eased the up elevator, knocking off the magnetically attached nose just before I pulled up.

Next, I put everything right in the middle.  On the third attempt, it balanced much better, allowing for a somewhat relaxing/enjoyable flight and a repeat of the smooth landing.  There's still some trimming to go, but I wanted to call it a day while my spirits were high and fingers and toes not yet frozen. 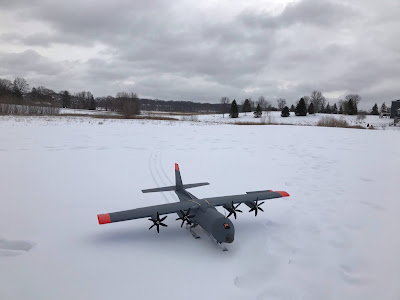 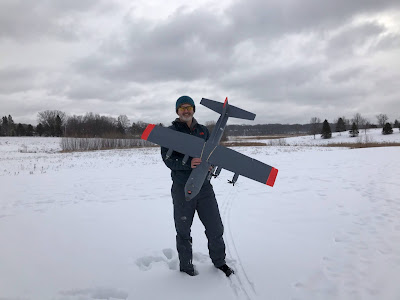 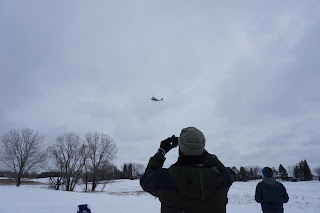 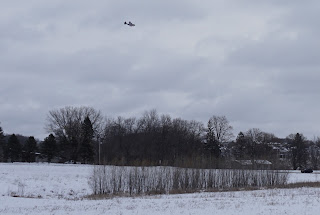 The next step is to fully trim the plane, get the FC functional, then fly FPV.